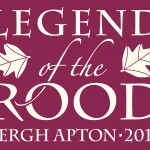 Stepping into the Unknown
A small group gathered in the darkness & shivered. They sipped hot drinks, wondering what they were letting themselves in for.

Two hours later the team had bonded as a well-honed troupe of players. The first Rehearsal for the first play of the Bergh Apton Mysteries was already beginning to show we have some exciting talent on board. What is in store, we wondered, once all fifty actors take to the stage in May? The levels of inhibition had begun to fall away and the adrenalin do its work. The troupe was creating life from off the page, where lovingly Hugh Lupton had sweated long and hard to bring us a script worthy of the master. The words took on new meaning. The world was created, man and woman crafted and the begetting commenced. And David Farmer was already extracting the homegrown talent’s deepest and previously untouched strengths as his directing talents came into play.

Prepare to be amused and delighted when the four plays have fully come to life, once rehearsals are completed for the performances on 24th May, 1st June & 8th June.
Find out more on the website and twitter and facebook – and be sure you get your tickets soon. They are already selling well and there are only 200 available for each performance.