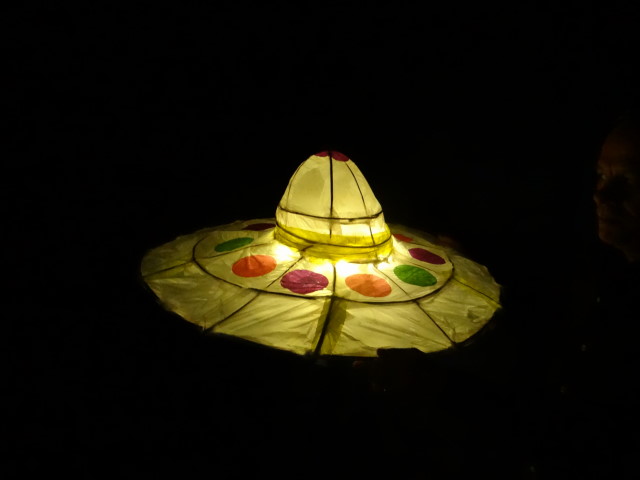 “For a while there I didn’t think I’d be able to get my spaceship to work.” I said to Maisie.

This of course implied that I had, in the end, gotten my spaceship to work… and indeed I had. How pleasing!

I had attended the lantern making workshop arranged by BACAT and facilitated by Kate Munro, who charmingly enthused us about the task at hand. Fifteen people were welcomed with a cup of coffee and a place at a table covered in plastic sheet.

Those who had expressed an interest had been asked to think of something to make at the workshop, and after Kate explained the technique of bending the willow twigs that she had bought along (pre-soaked); we set to our plans.

A quiet buzz of activity consumed the room, in the same way that a room falls silent of conversation at the start of a good meal. Silent apart from the chink of cutlery and china; or in this case the sound of ripping masking tape. Occasional muttered apologies could also be heard as the springy willow inadvertently clips your neighbour around the ear.

We all did our thing, in studied concentration, punctuated by brief words of encouragement by Kate or the other er luminaries.

Around lunch time we reluctantly left our work to eat a baked spud, some cheeses and an inventive salad including nuts and berries. Delicious!

More peace and quiet while we worked on our projects and then tea and a sticky bun.

Then time to go… five hours had whizzed past and we were able to pack our, mostly finished, slightly sticky lanterns into our cars. They were bigger than planned – so some of us had to walk home.

If you haven’t attended one of the many workshops organised by BACAT, I encourage you to do so. From a personal perspective; approaching the day it seemed like a lot of time away from getting necessary chores done. At the end of the day I felt tired, peaceful and satisfied… which is pretty much as good as it gets.

…And the plans for a flying saucer space ship had worked! 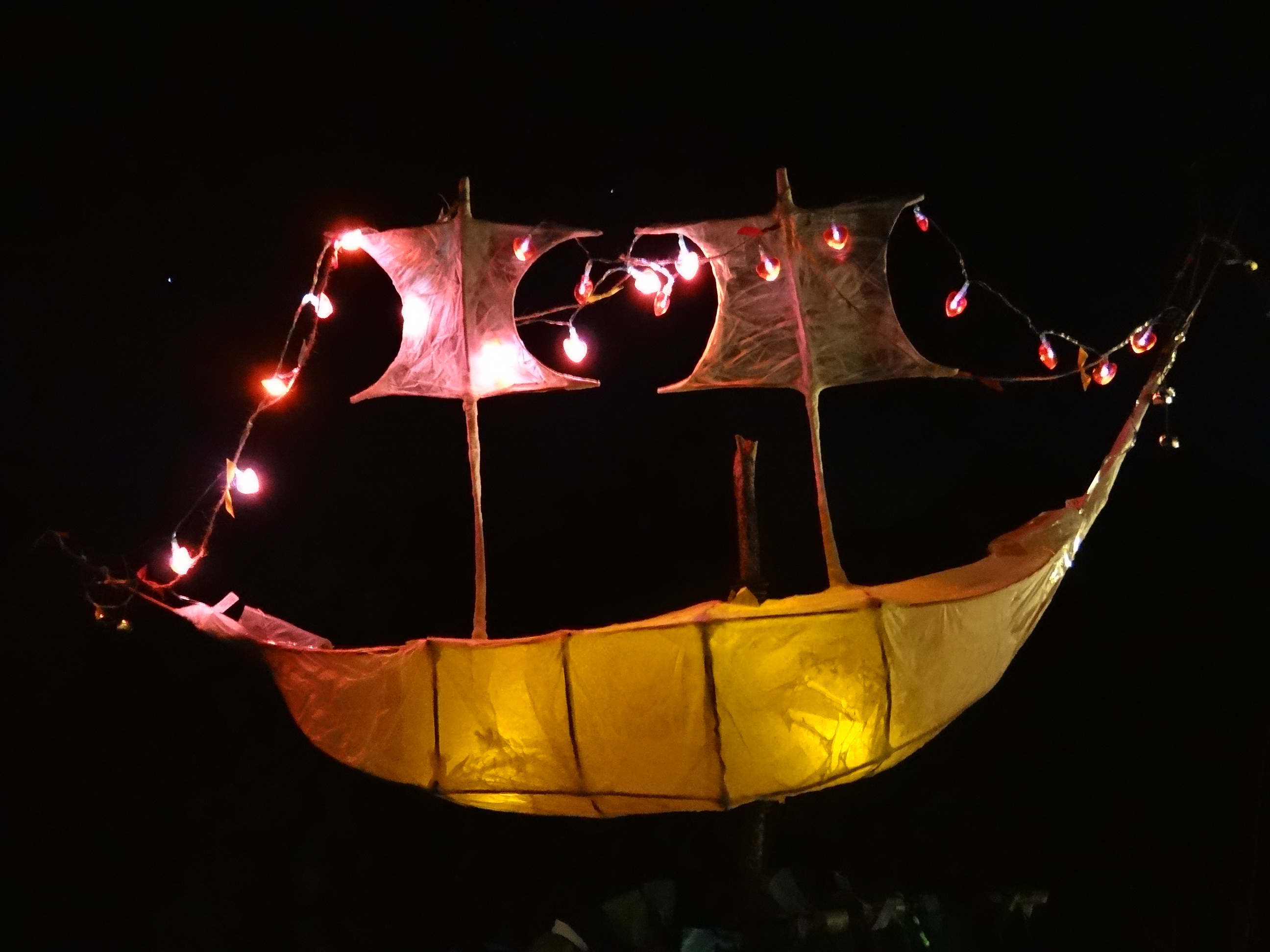 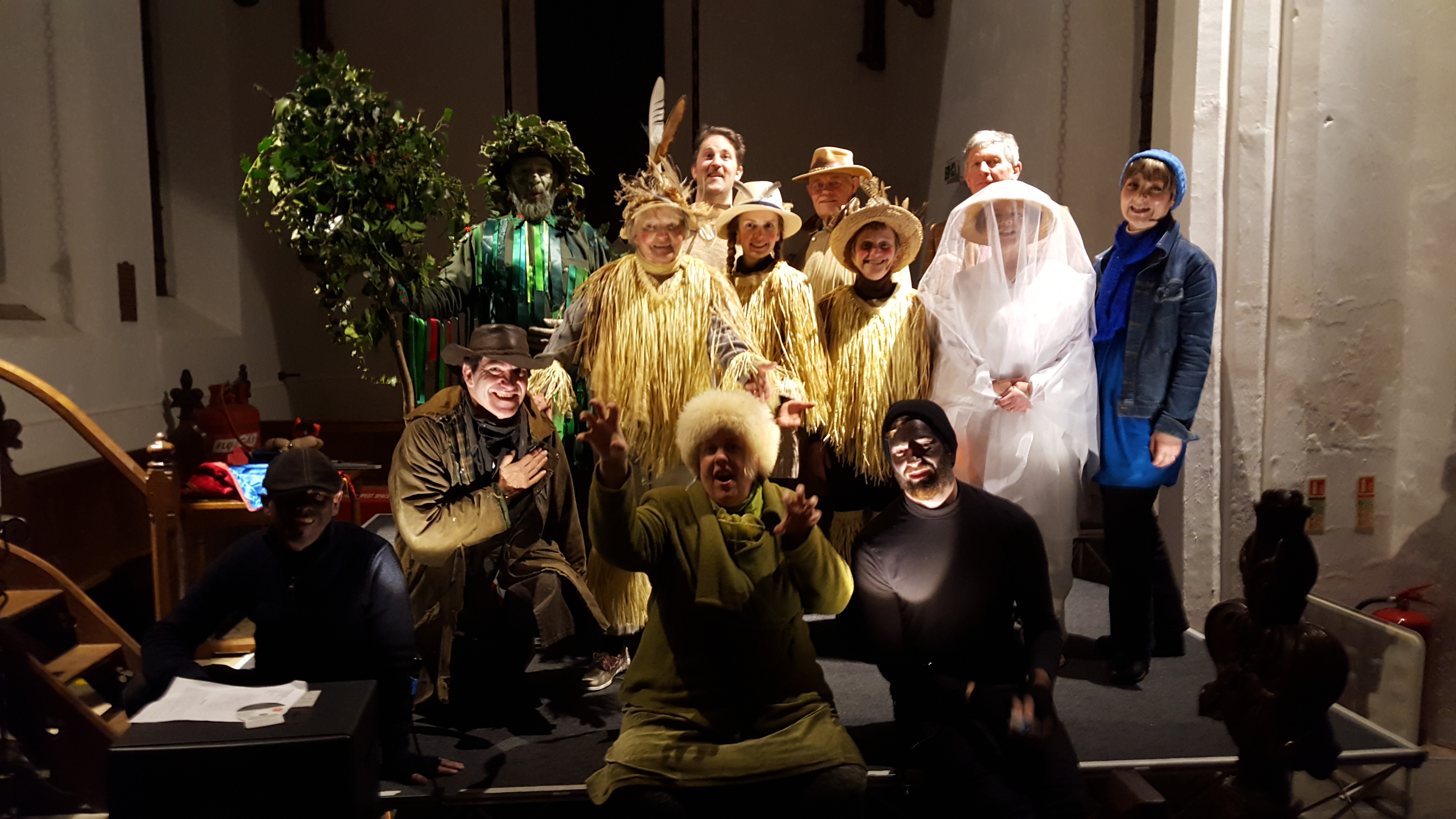 Midwinter Dreaming has been captured for posterity.

Banjo Films have done wonders filming the Play for Candlemas in the February darkness.

The DVDs have virtually sold out

BUT a very few are left in stock.

Do order a copy to re-experience the magic of the performances.

The mechanistic world of twenty first century Britain where we shape our environment to suit us is superimposed on a far, far older layer of being. Now and again a wild and wet winter and even the turbulent world itself cuts us down to size and we wake up to older rhythms of season and time. We live in a richly layered island, an ancient kingdom marinated in ritual and rhyme, song and story which wind the clock of the year. In 2012 we were host to the Olympic Games and the Opening Ceremony, ‘Isles of Wonder’ tapped into this rich seam and in 2016 we did the same with ‘Midwinter Dreaming’.
Over the last twenty or so years ‘Bergh Apton’ has become a brand, a brand associated with innovation, with events that inspire, interest and intrigue. We never set out to decide what to do next we wait for an idea to hatch in our imaginations and so with ‘Midwinter Dreaming.
It was deliberately entirely different to our last production, the Cycle of Mystery Plays, it would be staged in winter not summer, it would take place in one site and it was to be an experience as well. ‘So along comes BACAT with an event rooted in the year’s cycle, with an eye to the past but not thoughtlessly re-enacting it, instead creatively reinventing, a new thing in fact that had a community life spanning half a year with scores of people happily and creatively involved and whose actual telling covered all these wonderful performance areas, costume, decoration, sculpture and light, a moving and involved audience, taste, fire, a surrounding sound and music, song, story, the spectacle of performance, humour and of course the underlying reality of the dark, the night, the cold and the enduring building itself.’
The call went to the Tribes of Ton and not only they but those of our closely related Tribes of Ham and Land responded and Tribes from far flung regions, the Nordovicians, Becclodians and Bungavians, a wide community has been created. It says much for us that the three professionals, well known nationally and internationally, were very willing to join in and work with us.
The play was written in discussions and writing sessions with Hugh Lupton, Mary Lovett created sublime music and singing with our musicians and singers and Charlotte Arculus taught us so much, she took a young idea, turned it inside out, shook it about and, between the three of them and us, we wove a magic, one little idea became a wonder to all who took part and who came to see it. It was not only us humans who created the magic but the time of the year, the season of Candlemas, halfway between the Winter Solstice and the Spring Equinox and the ancient church itself, assured and reassuring.
‘…..so many people involved in so many different areas but all willingly going the same way. And it achieved what it set out to do, it marked the division of the winter from the days we inhabit now and it brought to life all those characters….the Wren Boys, the Bee-keeper, we could see and know Hugh’s mummers as individuals. Next winter I think we will miss not having it.’ The village website gives a selection of other comments from our audiences.
All those involved will be far too modest to acknowledge the huge amount of time and interest they gave so I have tried to blow the trumpet for them, they were wonderful.
A special mention to Chris Ellis, our new Rector. He arrived in an unknown parish to find a group of people he did not know had plans for an event he knew little about in the church. He was good humoured and allowed us more or less carte blanche to use the church as we needed, I take my hat off to him.
What’s next?

The answer is blowin’ in the wind.